This week brings the final instalment of the little guys’ visit to Salcombe. You’ll recall from the first and second instalments that our guide, crew member and volunteer press officer Matt, has already shown us around the lifeboat centre and museum, as well as around the station’s impressive Tamar class all-weather lifeboat (ALB). So our next stop is the boathouse and the inshore lifeboat (ILB) that it houses.

As we entered the building, the first thing we noticed was a huge great box by the door. It looked like some kind of space-age washing machine, festooned with big (and rather tempting) buttons. This, Matt explained, is the paging system. When the Coastguard decides that the lifeboat is needed, or if the station itself decides that the lifeboat needs to launch, the Lifeboat Operations Manager (the ‘Honorary Secretary, or ‘Hon. Sec.’, in my Dad’s day) or one of the Deputy Launching Authorities (DLA) pages the crew using this gizmo, which sends a suitable message (by radio) to the crew’s own pagers. The paging system can also be operated by phone. 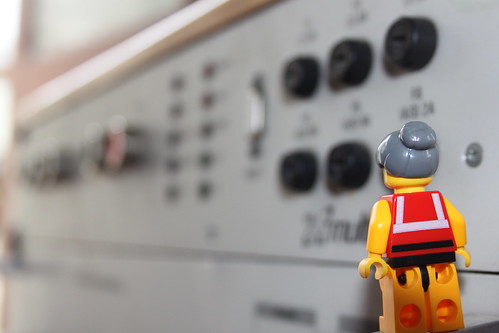 When the crew members receive a page, which says something like ‘Launch ALB’*, ‘Launch ILB’ or ‘Launch both lifeboats’, they get to the station as quickly as they can and then get ready to go. As most of the crew live or work (or both!) quite close to the station, we’re looking at a matter of minutes here. Things happen fast, Matt was keen to emphasise. Very fast.

Older readers may remember that maroons were sometimes used to summon the crew at some stations, either as a back-up to pagers or instead of them. Essentially massive fireworks that emitted an enormous ‘bang’, these had the potential to behave a little erratically, so they’ve been phased out now. But they did serve the useful purpose of letting everyone, not just the crew, know that the lifeboat was launching. This brought communities together, but perhaps more importantly also warned anyone near the lifeboat station to get out of the way.

The station is currently exploring the use of a siren to fulfil a similar function, alerting the community that the lifeboat is launching and encouraging pedestrians and watercraft to clear the area around the slipway or launching area. Matt was enthusiastic about this, though was amused that the station would have to play a warning announcement before the siren went off. Presumably something along the lines of ‘Attention. A big siren is about to go off. Then lots of people are going to come charging at you from all directions. Then the lifeboat’s going to launch. Please get out of the way.’ Personally, I prefer the maroons (I’m a bit of a traditionalist about such things), but the siren really does sound like an excellent idea.

To avoid wasting time when launching the lifeboat, the Crew’s kit is all hanging up and ready to go in the boathouse. This includes oilskins (OK, so it’s Goretex now, but I guess we can still call them oilskins) for the ALB crew, drysuits for the ILB crew, protective equipment for the shore crew and lifejackets for everyone. 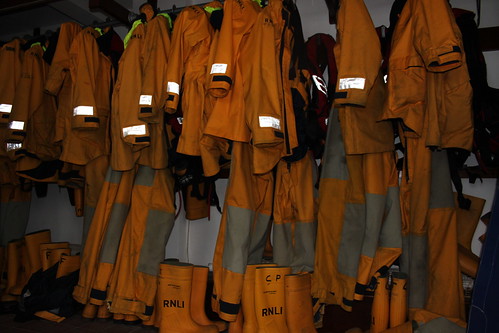 Pret a porter: The Crew’s kit is ready to wear

The inshore lifeboat crew have helmets with visors and a radio microphone. The Crew loved these, which to them were like big protective domes. Here’s crew member Steve demonstrating… 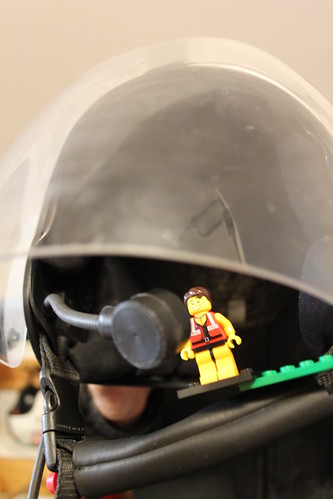 In the main boathouse, the station’s Atlantic 75 inshore lifeboat ‘Joan Bate’ was ready for service. Technically, she’s a B class lifeboat. There are two types of B class lifeboat – the Atlantic 75 and the Atlantic 85, which are roughly 7.5 and 8.5 metres long respectively.
The name Atlantic comes from Atlantic College in Wales, where the class was first developed. With a crew of three, fuel capacity of 182 litres, two 75 horsepower outboard engines and a top speed of 32 knots, the Atlantic 75 has an endurance of two and a half hours and can carry an astonishing twenty survivors. 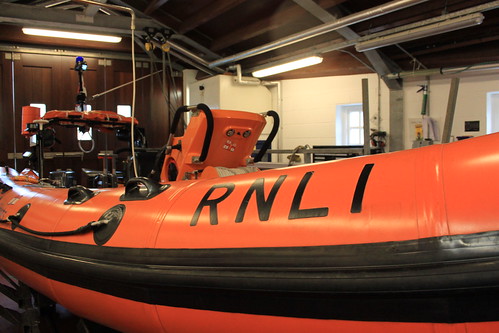 The Crew were incredibly excited about the lifeboat. Here are Coxswain Bob and crew member Jackie on the sponson, which is the inflatable tube that surrounds the boat. The sponson is made of hypalon-coated nylon and is very tough. I mean, I stood on it*, so it’s got to be fairly robust. It’s also made of eleven separate sections, so that a puncture in one section doesn’t affect the others. And the boat can even float without it. (Though would look a little minimalist, I would imagine.) 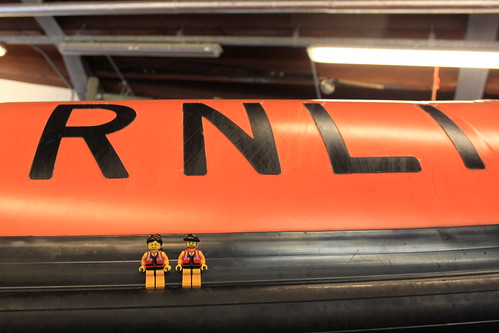 The boat is stored on a purpose-built carriage and is launched down the slipway using a large winch. Here are Mechanic Dave and crew member Susie looking out of the boathouse door towards the slipway. The assembly on the stern of the boat is the self-righting bag, which can be inflated from a gas bottle in the event of a capsize and rights the boat in a few seconds. (When we were visiting Falmouth’s Atlantic 75, I remember being amused that the instructions for the self-righting gear were printed upside down, so that they were the right way up when the boat had capsized. Now that’s attention to detail!) 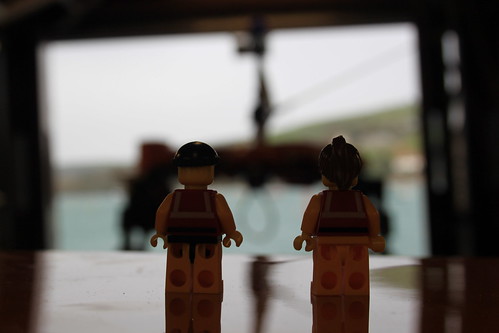 The helmsperson steers the boat from a central console, which attracted crew member (and ace helmsperson) Susie like a moth to a flame. 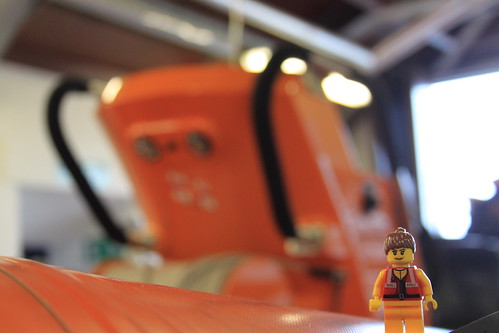 Crew member Susie makes a bid for the helm 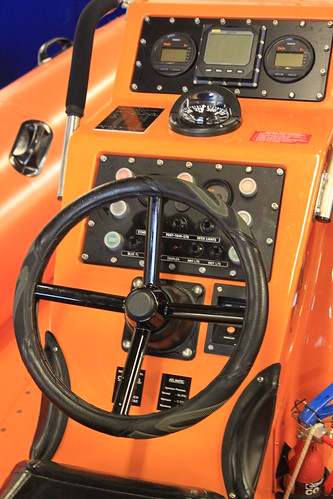 The helming position on the Atlantic 75

The Crew were keen to check out the lifeboat’s controls. They were particularly impressed with the ‘waterscoop’, which scoops in water underneath the bow to add ballast to the forward end of the boat when working in heavy seas. 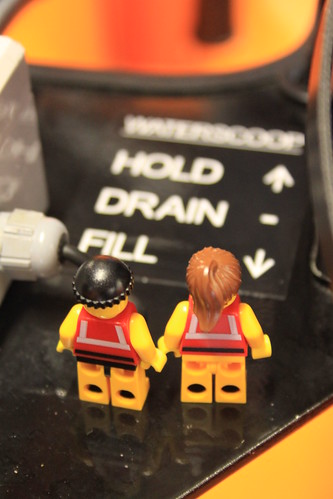 The control for the ‘waterscoop’

As our tour came to an end, the Crew felt privileged to have had the opportunity to learn so much about the station and its boats. And so did I. I remember my Dad working on the development of the Atlantic 75 when I was younger, so being able to see the boat up close brought back fond memories. In fact, my Mum has somewhere in her house a big framed photo of my Dad on one of the early Atlantic 75s, together with one of the Atlantic 21s that it was designed to replace, signed by all of the crew that had helped to prepare her for service. Looking at his grinning face in the photo, you’ve never seen anyone so happy.

All that remained was to thank Matt, who had given up a large part of his weekend to welcome us to the station and to share his enthusiasm for the work of the lifeboats and their brave crews. So a massive thank you, Matt, for being such a great host. It was an absolute pleasure to meet you and to learn so much about the station, its boats and its crew. 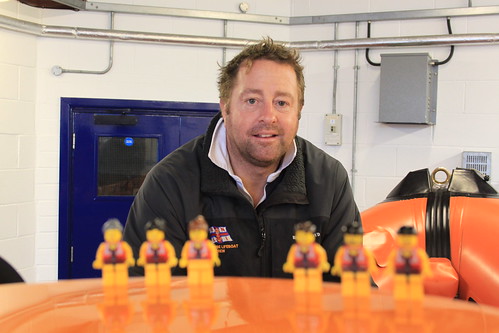 And we couldn’t leave without one last group shot of the Crew. So here they are on one of the Atlantic’s outboard motors. Massive grins all round… 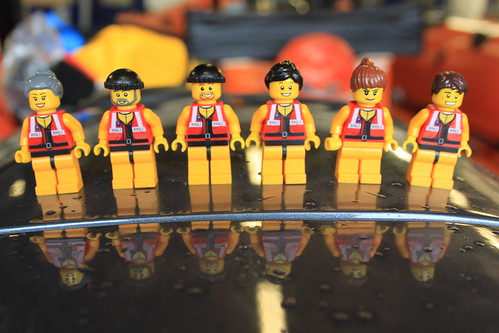 Happy memories of a fantastic day out