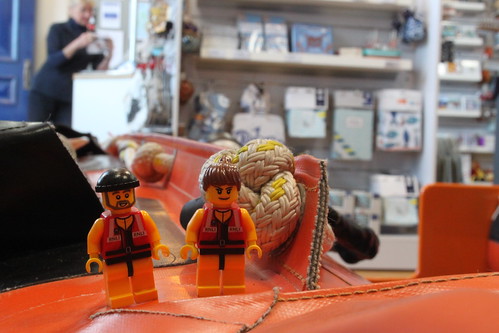 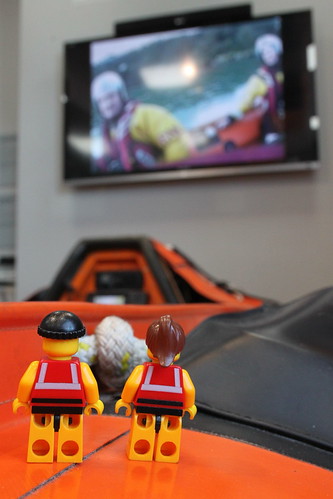 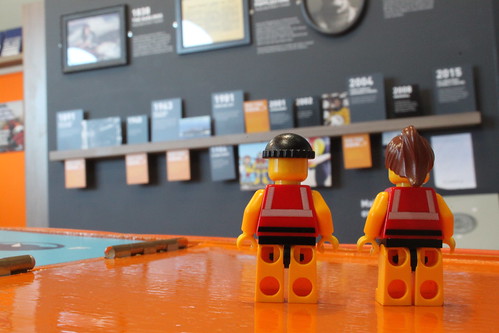 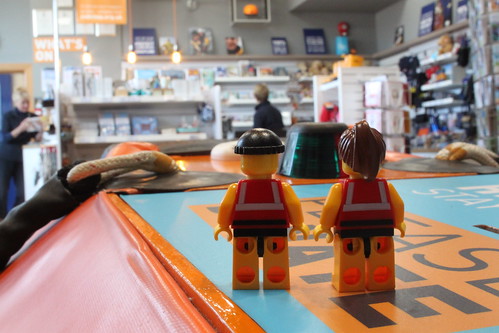 We hear it all the time when we’re out and about. ‘Poole’ did this. ‘Poole’ said that. Oh, you’ll need to check with ‘Poole’. The RNLI’s headquarters in this Dorset town have taken on an almost mythical status across the organisation. But things recently got a whole lot more real for the little guys. Because they managed to wangle themselves an invitation to visit this throbbing heart of all things lifeboat.

We travelled down the night before, so as to avoid any last minute traffic-related hiccups. Which had the added bonus that we got to stay in the extremely pleasant RNLI College, a home-away-from-home for lifeboat crews developing their skills. And also, I should probably add, available for courses, conferences and short breaks. 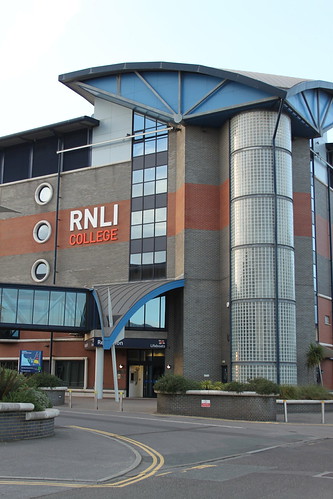 The following day, we didn’t have anything scheduled until mid-morning, so while the Crew got themselves ready, I put on my trainers and went for a run down to the beach at Sandbanks. As I lolloped slowly around the harbour, memories of a youth spent sailing between the islands and working on the harbour cruise boats came flooding back…

Back at HQ, our first activity was a tour of the College itself – with the highly knowledgeable and extremely pleasant Chris as our guide. Now, I’ll tell you more about our tour in another blog post at some point, but suffice to say that the College is – to put it quite simply – awesome. And that’s before we even start to talk about the lifeboat simulator. It was so realistic, the Crew were wobbling around on their sea-legs for quite some time afterwards. 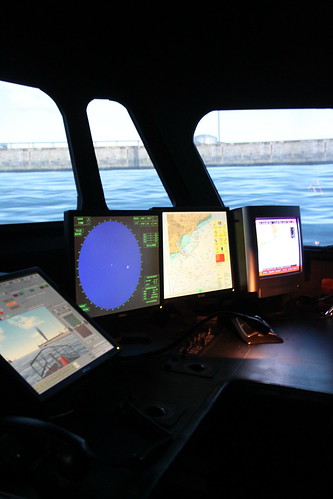 After lunch in the College restaurant, it was off to the All-Weather Lifeboat Centre (ALC), this time with naval architect Dan and Ross, the man behind the ‘Respect the Water’ campaign and the kind soul who had invited us to visit in the first place. 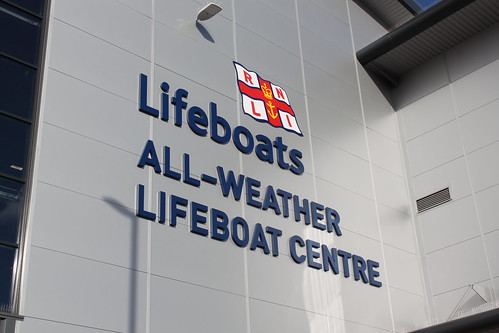 The little guys were delighted to see several Shannon lifeboats under construction and really enjoyed having the opportunity to see the parts that other tours, quite frankly, just cannot reach. 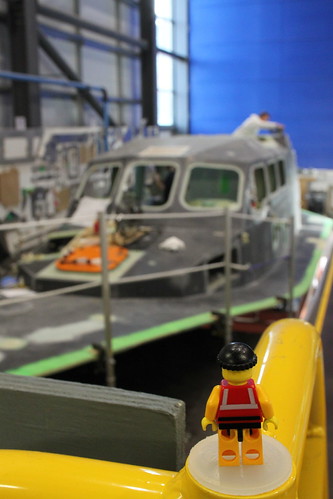 Our last (but by no means least) stop was the Sir William Hillary building, to visit the coastal safety, social media and marketing teams. The Crew and I were overwhelmed, to be honest, that so many people were happy – keen, even – to take time out of their busy schedules to tell us more about what they do. 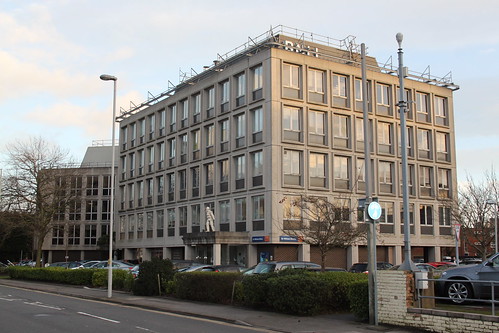 As I said, we’ll tell you more about our visit in future blog posts. Suffice to say for the moment that, if you ever get presented with the opportunity to visit the RNLI HQ in Poole, seize it with both hands. Because it’s a great place with great people doing great work. And it most definitely lives up to the myth that surrounds it.

The run-up to Christmas is always a busy time of year, even if you’re only a couple of inches tall. The little guys were delighted, therefore, that their friends at RNLI Portishead had decided to wait until the new year for their festive meal and get-together.

And so, last Friday evening, the little guys got dressed up (well, got dressed, which is about as much as we can hope for around here) and headed down to the H&W pub/restaurant overlooking the town’s marina. 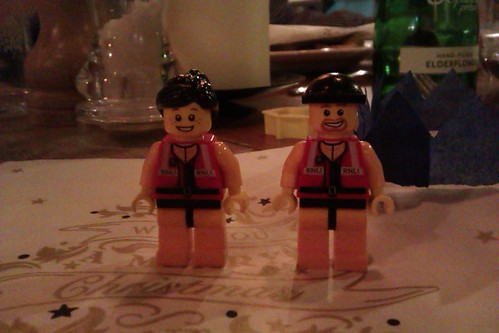 The first thing that the Crew noticed was that the pub’s upstairs dining room was absolutely heaving, with over a hundred people greeting each other warmly and finding somewhere to sit. The second thing they noticed was that all of these people were crew, fundraisers, station officials and otherwise connected to the lifeboat station. A bit overwhelming, really. 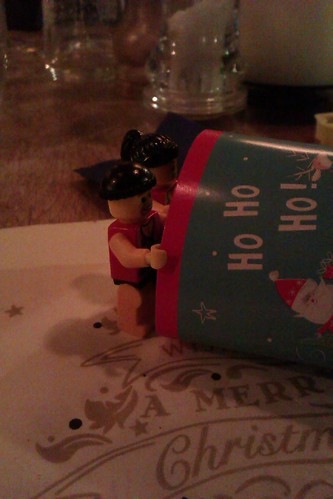 Unabashed, the little guys quickly got into the festive swing of things. Crackers were pulled, new friends were mad (including most of the lovely waiting staff) and plans were hatched.

One of the plans, however, appeared to be the theft of my dessert… 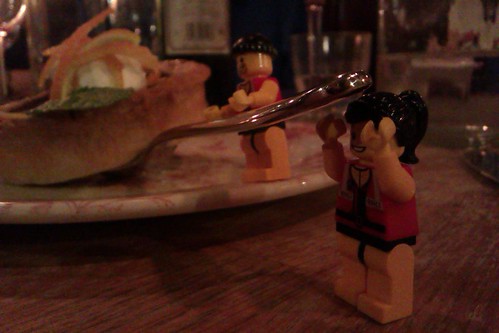 Thankfully, I noticed in time and quickly put a stop to such shenanigans. That’ll sort them out. 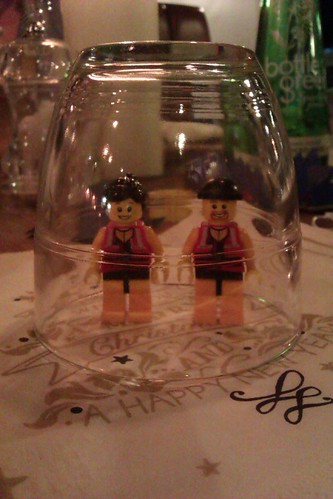 It was a fantastic evening, though, and the little guys, Natalie and I had a truly awesome time. A massive thank you to the tireless Helen, the station’s press and publicity officer, for putting together such a great event. And thank you, too, to the brilliant staff of H&W for making us all so welcome.

During their recent trip to Scotland, the little guys had the pleasure of spending a week in the rather excellent village of Tighnabruaich. Situated on the picturesque Kyles of Bute, Tighnabruaich is part of ‘Argyll’s Secret Coast’ and is a popular sailing destination for those intrepid enough to venture this far north.

The Crew had done some planning this time, so knew before they arrived that Tighnabruaich has its own lifeboat station. But they couldn’t wait to get down to the water’s edge to check it out for themselves. And here they are… 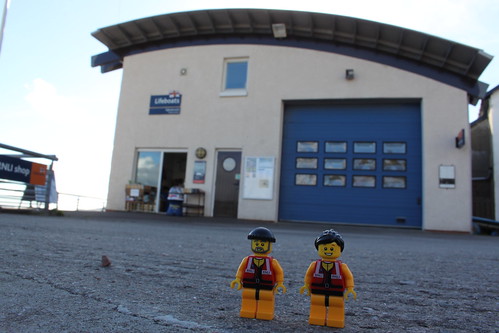 The station was founded in 1967 with a D class lifeboat, which was kept in a boathouse in the grounds of the Tighnabruaich Hotel. The station swapped the D class for a C class in the early 1990. In 1998, the C class was itself swapped for a larger Atlantic 75, which was in turn replaced by the station’s current Atlantic 85.

The present boathouse was built in 1997 and is situated right on the shores of the Kyles of Bute. It has a slipway for launching the boat as well as a new floating pontoon extending out towards the Isle of Bute. The station has a considerable operating area, too, stretching around the Cowal peninsula and well up into Loch Fyne – almost an hour from the station at top speed. 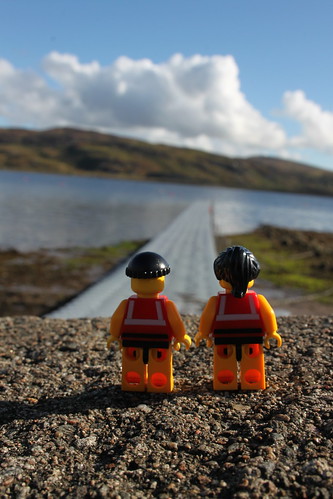 The station’s Atlantic 85 James and Helen Mason was launched in 2012 and, like the boat of the same class at the Crew’s home station of Portishead, has a crew of four and is powered by two 115 horsepower outboard engines, giving her a maximum speed of 35 knots. And here she is… 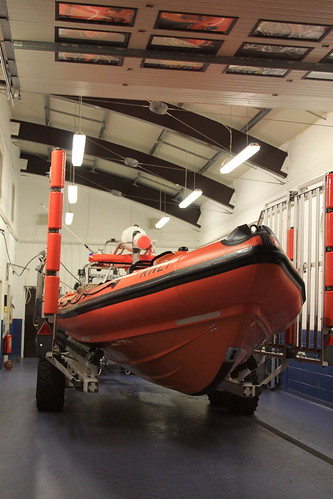 Incidentally, the James and Helen Mason made waves at her naming ceremony by launching with an all female crew, including helm Kim Thomas, whom we had the pleasure of meeting during our visit. (And again the next day on the Tarbert-Portavadie ferry!)

The little guys had timed their visit to coincide with one of the station’s training sessions, so were delighted to meet Lifeboat Operations Manager (LOM) Ronnie and members of the crew. They hung out for a while in the crew room upstairs in the boathouse, learning about the station’s history, and were then invited (to their great excitement) to have a look around the boat hall. 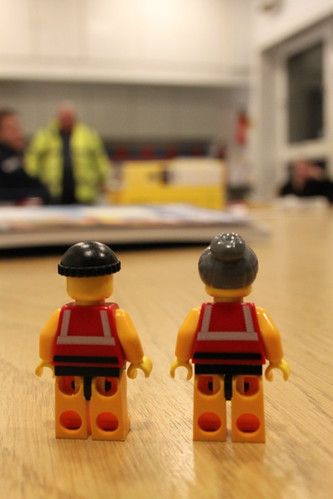 Like Portishead’s Atlantic 85, the James and Helen Mason is launched from a carriage, which is pushed out of the boathouse and down the slipway by a rugged County tractor. The tractor itself is marinised, which means that it can wade safely to a depth of 1.5 metres. (You’ll notice that RNLI tractor drivers wear lifejackets, too!) 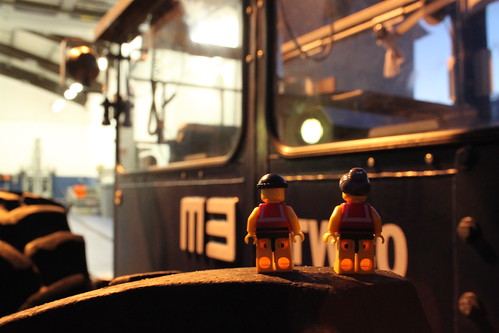 The little guys felt somewhat dwarfed by the tractor’s huge tyres, but that’s quite a common feeling when you’re only an inch and a half tall. And they were soon distracted by the Atlantic on her carriage, freshly washed and ready to launch at a moment’s notice. 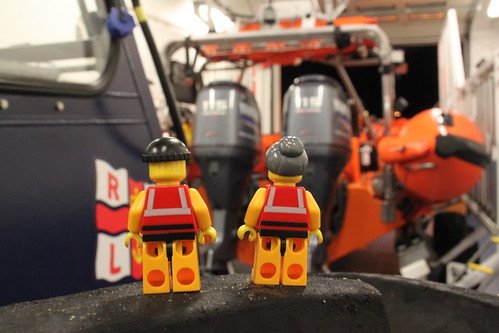 After a while, though, it started to get a bit late and the little guys (and the Tighnabruaich crew) were keen to get home for their tea. It was fantastic, though, to visit a station so similar to the Crew’s own and to learn how the Tighnabruaich crew operate in the challenging waters off the Scottish coast. (And the little guys had to admit that the scenery here is far nicer than at home – sorry Portishead!) 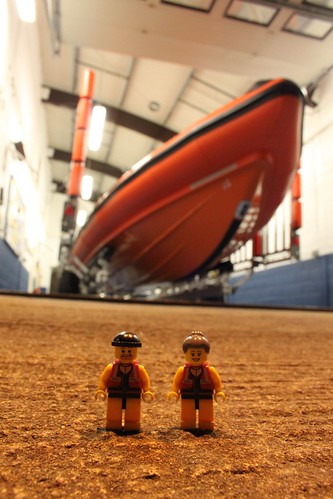 So a massive thank you to the crew at Tighnabruaich for their hospitality and for taking the time to show us around and to tell us all about their fantastic station. We hope to see you again soon!

During their recent trip to Scotland, the little guys were keen to soak up as much of the Highland atmosphere as possible. So right at the top of their ‘must visit’ list was the coastal town of Oban, the ‘gateway to the isles’.

This historic town, nestled on a well-protected bay, is perhaps best known as a tourist destination for those approaching by land and sea like. But it is also an important ferry port, with ferries travelling to and from many of the Hebridean islands. 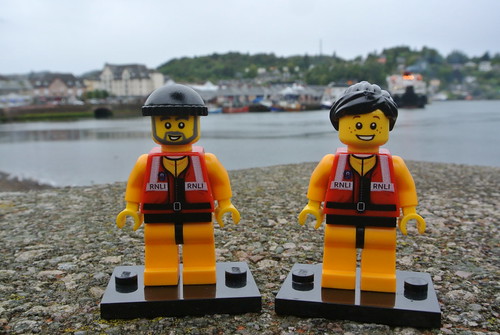 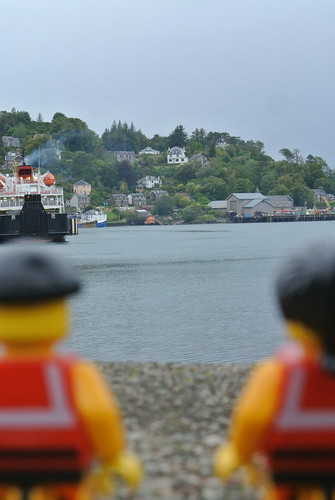 The Oban lifeboat station was established in 1972, though its current Trent class lifeboat ‘Mora Edith MacDonald’ has been on station since 1997. Since then, she has been called out over 1,500 times and has saved almost 100 lives.

Like the larger Severn class, the Trent is designed to operate safely in all weathers. She is just over 14 metres long and has a crew of 6. She has a maximum speed of 25 knots and a range of 250 nautical miles. And she is powered by two marine diesel engines, each of which pumps out a massive 850 horsepower. 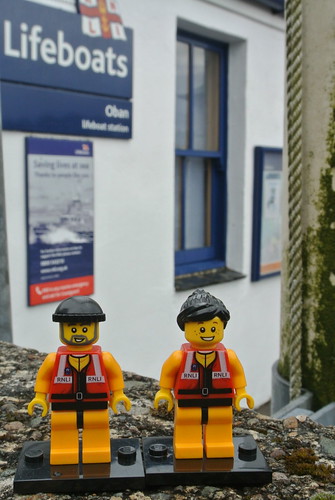 Typically, the little guys had failed singularly to plan ahead (and it was getting close to lunchtime), so had to content themselves with a quick wander around the outside of the lifeboat station. They were surprised to learn, though, that despite the relative youthfulness of the station, the building itself is over 180 years old. 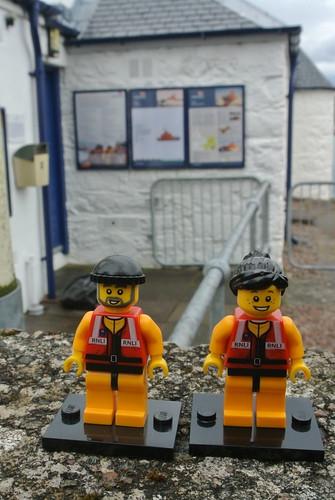 The ‘Mora Edith MacDonald’ is kept afloat alongside the station building, so that she can be ready to go at a moment’s notice. And the Oban crew certainly get a lot of practice, as the station is reputed to be the busiest in Scotland and their current boat was the first all-weather lifeboat to record over 100 launches in a year.

Having very much enjoyed their tour of the town, the little guys were delighted that they’d had the opportunity to have a look at the lifeboat station, too. They’re determined to learn more about the station and the islands around Oban, though, so I can sense another trip coming along in the not-too-distant future…